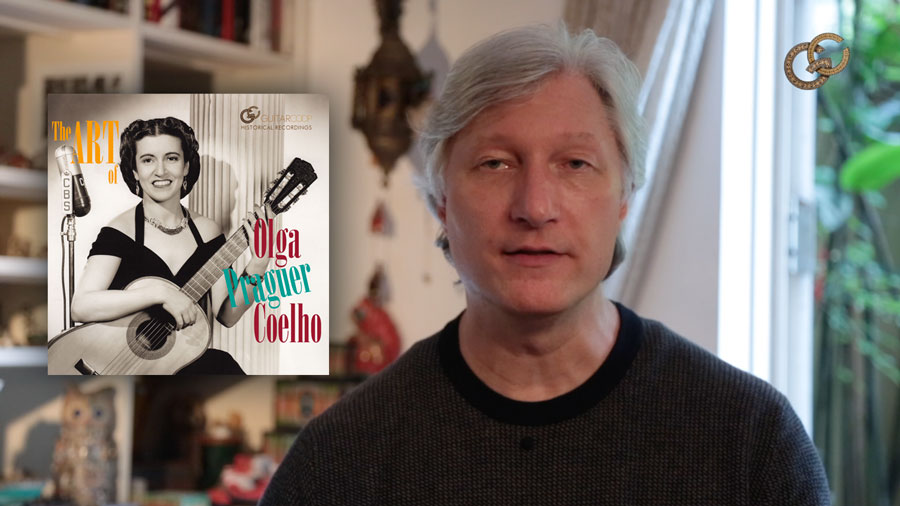 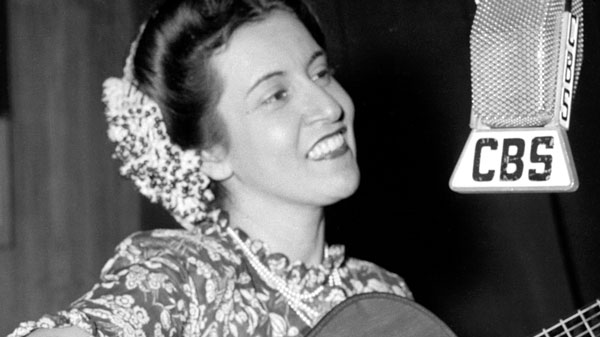 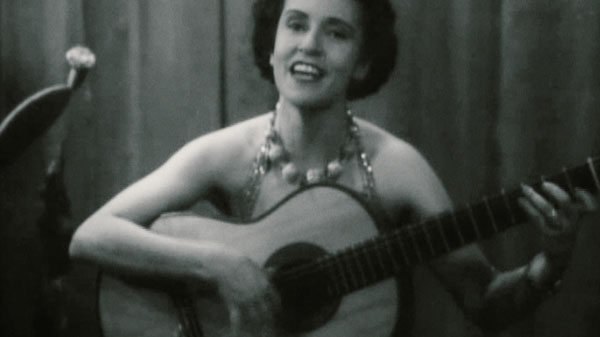 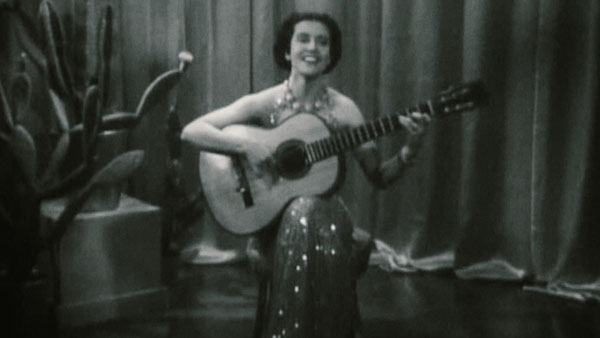 CD available only in Brazil

In the mid-1970s, Olga Praguer Coelho moved from New York to Rio de Janeiro.  The little girl next door was utterly mesmerized with her exotic new neighbor’s stories.  “Dona Olga would take an object in her house and tell me the story of how she acquired it, its provenance. Imagine a scene in a film, a little child, frequenting the apartment of a lady. I was fascinated by her stories. Olga was culturally rich. Her apartment was like a Disneyland for me.”

As she wove the web of her experiences round the spellbound little girl, Olga drew upon the memories of a lifetime that was astonishingly rich in adventure and achievement. Born in Manaus in 1909, she moved at the age of three to Salvador where her physician father accepted a position. At 12, she moved with her family to Rio de Janeiro. Rio provided the soil and nourishment for the flowering of her art and was the scene of her earliest triumphs. She had studied piano with her mother, a student of the distinguished Portuguese pianist, Vianna da Motta, but it was the folk music of Brazil, and especially the classical guitar, that inspired her. She studied voice with several teachers, preeminently the great mezzo-soprano, Gabriela Besanzoni, and guitar with Patricio Teixeira, himself a singer. Her earliest performances came on his “Radio Club do Brasil” in 1927. Concerts followed, her fame spread, and within two years she was on the cover of “O Violão”, a magazine dedicated to the guitar. Her first recordings, on Odeon, came in 1929, and throughout the next decade a steady stream of discs was released.

Her first international success came in 1935 in Buenos Aires, where she was a sensation. When she arrived back in Rio after several months, reporters swarmed over her as she disembarked. Shortly after, she was one of the stars of the opening concert inaugurating the Radio Tupi network. In August 1936, Olga flew on the Graf Zeppelin from Rio de Janeiro to Germany to attend the closing ceremonies of the 1936 Summer Olympics in Berlin and to launch her first European tour as the newly appointed Ambassador of Brazilian Music by President Getulio Vargas (1882-1954). The Rio newspapers reported on her triumphant performances throughout Europe—Germany, Italy, France, Austria, Hungary, where Bela Bartok (1881-1945) was in the audience, Belgium, and Britain. She broadcast on the radio—some of her German performances appear on this CD. She returned to Europe every year and the scope of her tours expanded to practically all the European countries. She appeared on the fledgling TV in Germany and Britain, and her autograph book records the praise of some of the greatest European writers, artists, and public figures of the time.

The year 1939 saw her and her husband Gaspar Coelho travel to New Zealand, Australia, Singapore, Java, and South Africa. Newspaper accounts of her concerts were universally rapturous. The Coelhos returned to Rio in the early days of the Second World War. The next stage of Olga’s life came in 1941 when she and her husband moved to New York City. Olga performed at the White House for Eleanor Roosevelt, who sang Olga’s praises in her newspaper column. Soon she had a twice-weekly CBS radio program broadcast all over America and transmitted by short wave to Brazil, as part of the war effort in connection with the Good Neighbor policy.  The song, La Cucaracha, from one of her CBS radio shows, appears on this CD.

In November 1943, she met Andrés Segovia, who had come to New York to rekindle his American career. A romance blossomed, and eventually Olga and Andrés left their spouses and established a life together that was to last nearly twenty years. Segovia made many arrangements for Olga’s voice and guitar, and under his tutelage, her guitar playing, already professional, advanced to another level of achievement. More recordings followed in the United States and Europe—on Hargail, RCA Victor, and Parlophone—several of which can be heard here.

After the war, her international career resumed. Only once did she and Segovia share the stage—in a 1947 NBC Bell Telephone broadcast. Notably, in the same year, Olga was the first guitarist ever to use nylon strings instead of gut in concert, at her Town Hall recital in New York on February 21.

The year 1954 saw her first LP, on Vanguard, recorded in Europe, reflecting her new guitar technique and expanded range of repertoire. Her final recording, on Decca, came in 1960. In 1971 Olga had a triumphant return to Buenos Aires, the scene of her earliest international success. She moved back to Rio in the mid-70s, living in an apartment building constructed on the site of her former family home in Laranjeiras. Olga continued to perform locally and internationally, and never really officially “retired.” She gave her support and encouragement to an entirely new generation of Brazilian artists, and her sparkling original personality drew many to her. She is remembered with love and fondness by all of these artists.

As time went on, her public profile went into eclipse, and Olga, once a shining star in the Brazilian musical world, was all but forgotten.  However, in 2004, there was a brief resurgence of her illustrious past when, like a shooting star, Olga received the Order of Cultural Merit from the President of Brazil.  She passed away in Rio de Janeiro on February 25th, 2008 at the age of 98.

Now, a decade later, the compilation of songs released on this CD provides a retrospective of Olga’s unique art and reestablishes her continuing relevance as one of the greatest singer-guitarists of all time.  A box set of her complete recordings is in preparation, as well as a biography of her astonishing life, and a facsimile edition of the musical gems arranged for her by Andrés Segovia.

Olga Praguer Coelho organized many of her concert programs into categories reflecting her wide-ranging and eclectic musical interests. Rooted firmly in songs of her Brazilian homeland, her recitals embraced songs from all over the world. She sang fluently in many languages – Portuguese, Spanish, Italian, French, English, and even Maori.

The choice and arrangement of the songs in this CD, taken from her large discography, have been shaped to mimic a typical recital. We begin with a group of Brazilian songs recorded earlier in her career. There follow songs in Spanish waxed mid-career from Colombia, Mexico, and Spain, including works by Manuel de Falla (1876-1946) and Andrés Segovia (1893-1987). These are succeeded by
a return to Brazil. After a quick trip to Argentina, come several 15th to 18th century European songs from France, Spain, and Italy. The final grouping, from late-career, consists once again of Brazilian works, a sort of “greatest hits” of well-known folkloric classics.

The “recital” opens with the embolada A Mosca na Moça from the northeast of Brazil. With its rapid rhythms and tongue-twisting lyrics, it became Olga’s first radio hit in Rio de Janeiro.  The Imperial lundú Virgem do Rosário, from the 18th century, admirably captures its African origins. In 1939, Olga made a cameo appearance in the Portuguese film, Varanda dos Rouxinóis, singing this song in a Lisbon nightclub.  The romantic Cantiga Ingênua (“When You Peer into My Heart”) is a melody set by Olga to a poem by Gaspar Coelho (1898-1986) and commemorates their marriage. Bahiana, a typical folk song of Bahia, is followed by Roseas Flores, a 19th century modinha, a sentimental love song, the first typically Brazilian popular music that emerged with the arrival of the Portuguese Court.

The Spanish grouping commences with Agáchate el Sombrerito, a Colombian waltz-like bambuco. La Cucaracha, with its hidden political meaning, became popular among both rebel and government forces during the Mexican Revolution of the early 20th century.  A folk melody takes us to Spain: Canción Andaluza, arranged for voice and guitar by Andrés Segovia, and dedicated to Olga. Then, two songs from Siete canciones populares españolas (“Seven Spanish Folksongs”) by Manuel de Falla, also arranged by Segovia for Olga:  Asturiana, a folk song of lament from Asturias in northern Spain, and Nana, an oriental-flavored Andalusian lullaby.

After a nod to Buenos Aires (where Olga had her first international success) with the Argentine folk song La Mulita, the story of a boy walking up the mountain with his little mule to meet his sweetheart, the program next moves back to old Europe. Opening this group is the 18th century C’est mon ami by Marie Antoinette (1755-1793). A pupil of Gluck, she set the music to lyrics by Jean-Pierre Claris de Florian (1755-1794). The 15th century Sephardic-flavored Ojos Morenicos, a villancico by Pedro de Escobar (1465-1535), is followed by Alessandro Scarlatti’s (1660-1725) baroque aria Se Florindo è fedele, from his opera La donna ancora è fedele.

The program ends firmly back in Brazil. Casinha Pequenina is a 19th century modinha with guitar arrangement by Andrés Segovia. The toada Banzo, music by Hekel Tavares, text by Murilo Araújo (1894-1980), reflects the homesickness felt by Africans during the time of slavery in colonial Brazil.  Next comes the famous song about a bluebird, Azulão, a poem by Manuel Bandeira (1886–1968) set by Jaime Ovalle (1894-1955). The penultimate is Brasílio Itiberê’s (1896-1967) evocative choro Cordão de Prata. Finally, Xangô, a macumba chant of intense savagery, collected by Villa-Lobos, and powerfully sung by Olga, conveying a passionate, diabolical ferocity.  She chants with her voice and strikes the dance rhythm on the guitar, building up to the moment when both the singer and listener fall into a trance.

Olga Coelho’s artistry embodies a unique combination of a beautiful, trained and versatile voice, unmatched musicality and interpretive ability, and flawless accompaniments on the classical guitar.  We invite you to experience, with the first release in nearly sixty years, the wonderful artistry of Olga Praguer Coelho.