Turn on the Closed Caption [CC] for english subtitles 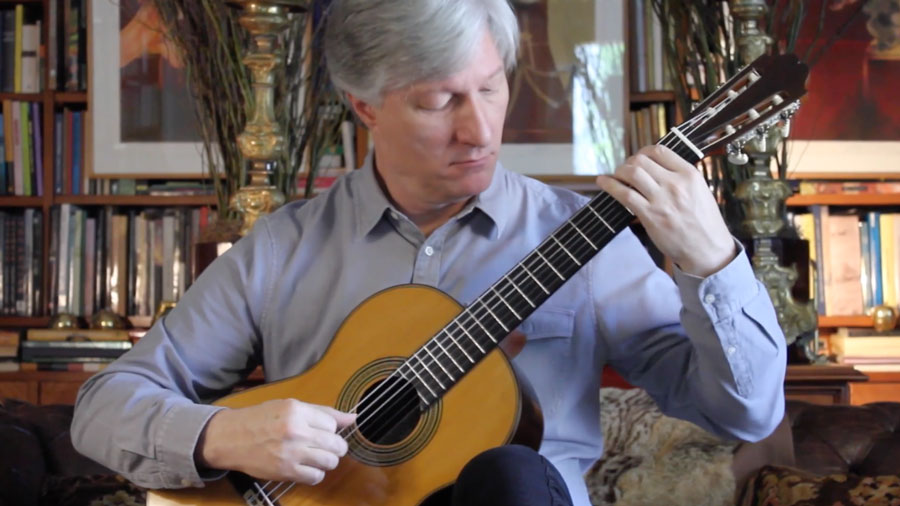 Beethoven’s death in 1827 and the July Revolution in 1830 coincide with the arrival to maturity of the first Romantic generation – composers who formulated the basic assumptions of what we now understand as Romanticism in music. One can detect in Schumann, Mendelssohn, Liszt, Berlioz, Chopin and Bellini the challenge of finding an ambiguous way to transform their personal experience, affected by art, literature and politics, in an artistic object. The same pole marks the end of the so-called Golden Age of the guitar; after 1830 it enters a period of perceptible decline. Nevertheless the guitarists-composers of this period – Mertz Coste, Bobrowicz and Regondi – are aligned to their colleagues by their aesthetic preoccupations.

Schubert’s music went “viral” during the 1830 decade; his lieder became so popular some editors used to attribute the composition of works by minor composers to him. This is the case of Adieu!, of whose author, August Heirich von Weyrauch, little is known. It became fashionable as authentic Schubert; even Liszt transcribed it for the piano as such, as well as Tarrega, whose guitar transcription is here played with minor corrections.

Paris was the hub centre for this generation. France’s most prominent guitarist-composer was an exact contemporary of that group: Napoleon Coste was born in Amondans and lived in Paris, where he studied with the celebrated Fernando Sor. His works depart from the classical framework of his teacher’s and seek for a more fluid and descriptive form. La Source du Lyson, op.47, like many of his works, celebrate the longing for country life. A source coming from a cave in form of a waterfall is described in the first part; the second fragment is a bucolic idyll and the third evokes a peasant festivity. Robert Schumann is the central name in German Romanticism, a composer at the threshold of fantasy and insanity, tradition and innovation. Schumann was married to Clara, one of the great pianists of her time, with whom he had seven children during a period of hectic activity. The affectionate feeling for his daughters is preserved in the three Children Sonatas, op.118; they were written, in progressive levels of technical difficulty, for the daughters who were respectively 8, 10 and 12 in 1853. Julian Bream’s transcription enhances its picturesque and enchanting details. Johann Kaspar Mertz was born in Bratislava, Slovakia, and made his name in Vienna; he is the author of a copious body of stunningly expressive works. His adhesion to the Romantic generation is made evident in the characteristic miniatures Bardenklänge (Bardic Sounds), op.13. This Song Without Words evokes Mendelssohn’s works of the same name.

Jan Nepomucen Bobrowicz’s adventurous existence was next to unknown until very recently. Born in Cracow, he went to Vienna as a boy to study with Mauro Giuliani; back to Poland, his involvement with independence movements forced him to exile. Living in Leipzig, the restrictions imposed by his status of asylum seeker ruined his musical career; starting in 1837 he worked as an editor and publisher to the end of his life. Grand Polonaise, op.24 is a piece of unique wingspan for the period; it is notable for the heroic character, anticipating Chopin’s polonaises, as well as the unprecedented technical demands and unusual formal plan.

Mendelssohn’s 50-plus Songs Without Words favour intimate expression in an era of virtuosity and have radiated his name amongst a public of amateur pianists as well as professional performers. Many of them were transcribed in the 19th Century; Venetian Boat Song evokes the guitars he heard during his visit to Venice; Consolation explores his contemplative side.

Forgotten during the best part of the 20th-Century, Giulio Regondi’s music has recently come back to the Romantic guitar repertoire. Born in Lyon (some authors say Geneva), Regondi was received as a prodigy from age 8 all over Europe. He made London his residence, and kept a successful international career until his premature retirement. Most of his works were published during the 1860’s ad they can be favourably compared to the best piano music of his time. Introduction and Caprice, op.23 is his best-known work, where the affinity with Mendelssohn is on the fore.
Best known for his daring works of youth and the formal experiments of the symphonic poems in his maturity, Franz Liszt, in his last years, wrote a considerable number of experimental, often gloomy, ecstatic or unfinished-looking short pieces, in a return to the idea of literary fragment. These miniatures, fruit of the depression of old age, match the intimate expression of the guitar. Andantino explore Liszt’s instrumental religiosity while Nuages Gris casts an arrow to the modernist future, uncompromisingly avoiding tonality until the last chord.