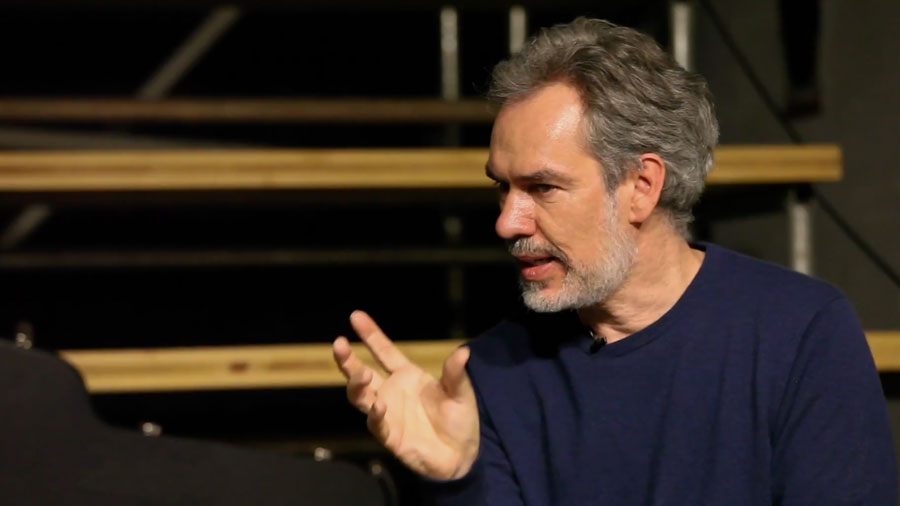 Paul Galbraith is internationally renowned as one of the foremost guitarists of our time. His revolutionary approach to guitar, allied to the searching depth of his interpretations, have made him an instantly recognizable figure in the world of Classical Music.

Paul plays a unique 8-string guitar, which he developed in 1993 together with legendary luthier, David Rubio. Rubio’s design departed from the established format, through borrowing a radical asymmetrical stringing system from the ‘Orpharion’, a renaissance instrument of the lute family. It was named the ‘Brahms’ Guitar, due to its richness of sound and wide range.

Paul’s individual approach to guitar technique stems from an idea he had in 1984 to free the right arm from holding, or resting on, the instrument. The resulting freedom enables an unencumbered flow between movement and sound. Paul continued to develop and refine his new-found playing position until, by 1987, it had evolved into the cellist’s posture he is associated with today.

Paul began concertizing in his late teens, having come to public attention in Great Britain through a series of televised competition successes. Asked by a member of the press after the 1981 Leeds Castle Segovia competition what he thought of Paul, who was awarded silver medal, Segovia raised his hand, and exclaimed: “Paul is magnificent. He will be a great artist”. 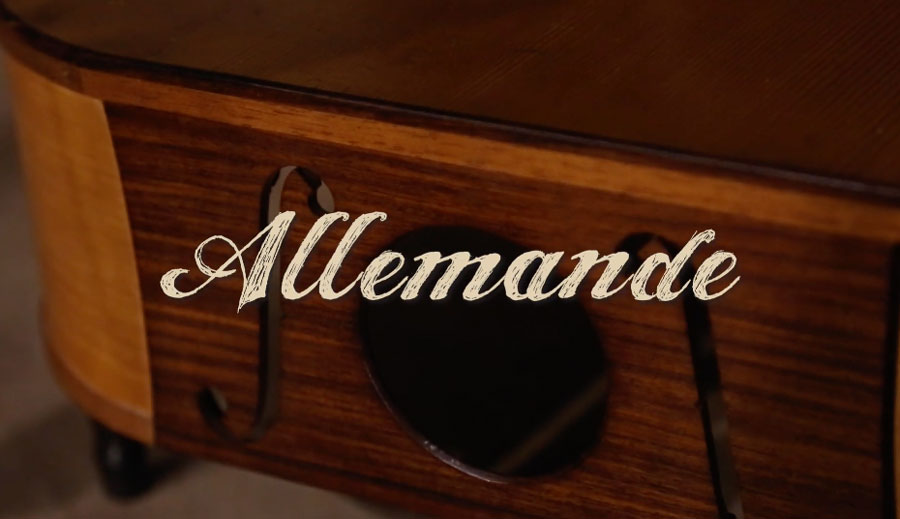 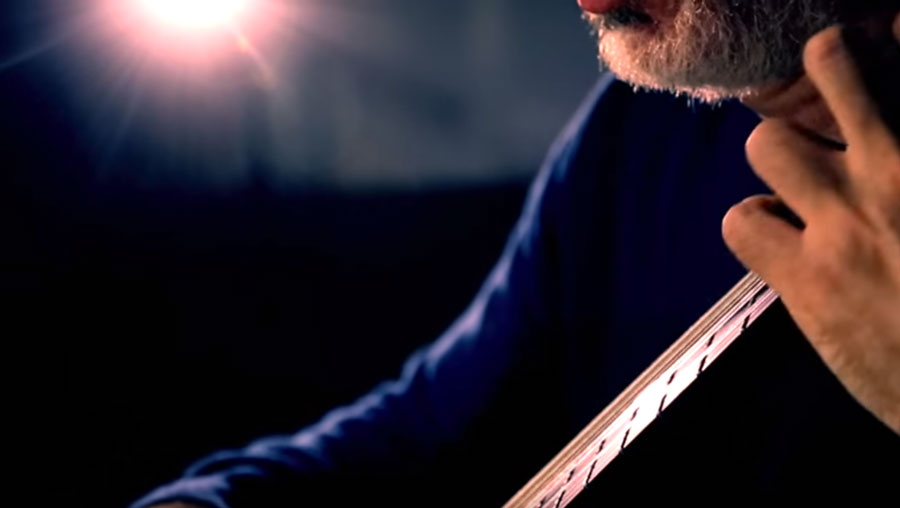 On the occasion of his retirement some years ago, Julian Bream quipped: “all we need now is a Mozart Sonata!”. It’s the ultimate tease for a Classical guitarist, since it taunts us over one of our greatest frustrations: we’d love to play Mozart, but don’t! Throughout our instrument’s history, guitarists have had a fascination with Mozart above almost all other great composers (with the obvious exception of Bach, and, for a growing number of us, Haydn). I think we guitarists feel that Mozart and the guitar make the perfect match, as each of us can easily hear, in our mind’s ear, the sound produced when the guitar’s characteristic timbral transparency and varied tonal palate are brought to bear on Mozart’s miraculous textural clarity and unsurpassable aesthetic sense. Of course, Mozart’s “guitar music” has only ever been a guitarist’s pipe dream, as Mozart never knew the guitar, let alone wrote for it. Significantly, during the first flowering of the classical guitar, in its early-19th century Viennese form, guitarist-composers were busy writing “music à la Mozart”, in an apparent attempt to compose the guitar music Mozart might have written – though not surprisingly, and despite the many fine pieces which this trend inspired, Mozart’s genius proved elusive. Following generations of guitarists resorted instead, every now and again , to transcriptions; however, Mozart’s magic still escaped us, failing (despite some successful arrangements of single movements) to gain a foothold in the repertoire. For, unlike with Haydn for example, most of whose 62 piano sonatas transfer amazingly well to the guitar, Mozart’s music as a rule tends to transcribe very awkwardly, especially when it comes to the larger sonata structures. That said, some exceptions are finally emerging.

My personal entrée to Mozart on guitar actually came via Bach, or to be more precise, Mozart’s take on Bach. Mozart had his “Bach year” in 1782, when he encountered copious amounts of J.S. Bach’s music for the first time, and composed a shower of Bach-style compositions in response. Luckily, one of those pieces, the Baroque Suite in C for harpsichord, has proved a perfect candidate for transcription, especially the “Allemande.” This movement sounds immediately arresting to guitarists and lutenists as it bears such a striking resemblance to the Allemande from Bach’s first lute suite. In fact it makes you wonder whether Mozart had seen that work and consciously taken it as his point of departure. In any case, I’ve opted to place the two Allemandes side by side, in order to show both the similarities and the differences between them, since Mozart manages to have it both ways: to sound partly like Bach and yet still fully like Mozart!

Mozart’s K.570 is his penultimate keyboard sonata, written in February 1789. It’s often regarded as possibly the greatest keyboard sonata Mozart wrote, and there certainly is an exceptional degree of tension here, between the refined means employed, and the wealth of feeling expressed. Bach’s influence, coincidently, can again be discerned, especially in the outer movements, with Bachian counterpoint employed at developmental and transitional junctures. The sonata’s opening movement (“Allegro”) also shows the direct influence of Haydn, through the fact of it using only one theme, Haydn’s trademark, rather than the usual two (or sometimes more, especially in Mozart).

The second and third movements are both in Rondo form though, predictably, they couldn’t be more different in gesture and expression. The second (Adagio) movement opens with a theme of valediction, quoting as it does a contemporary tune of ‘farewell’ (stage-coach departures at that time were always announced by a bugle-call – the “posthorn” – with this short, descending motif: Beethoven famously used it, some years later, at the start of his ‘Les Adieux’ sonata). In contrast, the third (Allegretto) movement opens with a combination of intense rhythmic compression and melodic augmentation, which creates paradoxical feelings of excitement and relaxation at one and the same time. The strength of these contrasts belies, however, their latent unity, whose source – as of everything in this sonata – lies in Mozart’s one basic idea, heard at the work’s very outset.

The two suites by Bach which conclude this recording were both ostensibly written originally for cello/cello da spalla. However, in the case of cello suite no. 5, BWV1011, we can’t be so sure. For while Bach’s manuscript of the cello suites has been lost, a beautifully preserved manuscript of this suite exists in Bach’s own hand, written expressly for lute: BWV995, which predates the earliest copy of the cello suites. And in fact, of all Bach’s lute works, this is the one that feels the most consistently idiomatic on the instrument, even if it does still require some editing to be fully playable; but then, Bach wasn’t a lutenist. It’s therefore arguable that this lute suite isn’t an arrangement of the cello suite at all, but rather vice-versa (just don’t try that on a cellist). Either way, the fact remains that, with this suite, we’ve been handed an example of how convincing Bach can be made to sound on guitar or lute, and consequently arrangements for these instruments of the remaining cello suites tend to take Bach’s lead, as my version for guitar of the ever-popular first cello suite does here.