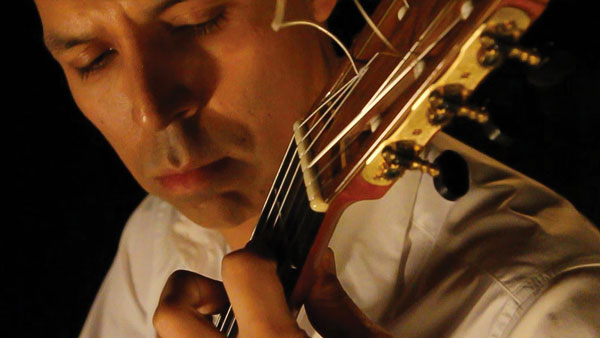 Transcriptions are such a central part of guitar artistry that one could say they have created inflections in its course almost as protuberant as original repertoire. This fascination for poetic re-creation, often con alcuna licenza, is a feature of the lute and vihuela tabulations of vocal works, made by such composers as Francesco da Milano or Luys de Narváez in the 16o Century. Tarrega, with his Albeniz versions and, later, the generation of Llobet, Pujol and Segovia, have created new expressive possibilities through their transcriptions of Granados’ La Maja de Goya or Bach’s Ciaccona almost as much as they did by inspiring original music by Falla, Villa-Lobos or Rodrigo. A transcription enterprise is validated in a twofold manner: it creates technical problems which, finding a new solution, replace the limits of what is possible further and further. At the same time it has to refund itself, revealing a personality and a texture only latent in the original. Not only that, a good transcription should be entertaining, enticing, even amusing. Mussorgsky’s masterwork, Pictures at an Exhibition, is notable for its gaunt scoring, deliberately written to create a rustic and case-hardened impression and to let the listener glimpse one’s own soul through the fractures. This has invited other composers to accomplish with an orchestra the sounds sketched by the piano. Ravel’s orchestration is more popular than the original, but there are more than twenty different orchestrations, from Francisco Mignone to Vladimir Ashkenazy, in addition to versions for band, organ or synthesizer. The work’s monumentality seemed to keep it out of the reach of the guitar, until Kazuhito Yamashita revealed, in 1980, his version, to general incredulity. This work put his name in the pantheon of the great transcribers and brought Mussorgsky, his intimacy and human dimension, back to the place bizarre orchestrations had stolen him from: the emotional core.

Furthermore, he created a compendium of new technical problems, including various tremolo combinations, the use of the right-hand little finger, suicidal shifts and extreme stretches. Most of these techniques were totally new at the time and kept the transcription as an impossible-to-climb mountain. Jorge Caballero here displays his mountain-climbing credentials and launches an era where the plain negotiation of technical difficulties is not even questioned: a wholesome, integrated musical conception emerges.

Rimsky-Korsakov had premiered, between 1887 and 88, three works that crowned him as a master of orchestral colour. The first of them was Capriccio Espagnol, op.34 (the other two being Scheherazade, op.35 and Russian Easter Overture, op.36). Here, Caballero takes on an even greater challenge: to ‘minimize’ for the guitar a work whose unquestionable main point of interest is orchestral colour. Ingrained cultural crossed-references, associating Spain to the guitar, come to his aid. As though he were writing musical footnotes, Caballero reveals the origin of dance gestures, rasgueados or punteados so ingeniously designed by Rimsky-Korsakov for the orchestra. It is often said some of the best Spanish music has been written by French (Bizet…) and Russian composers; Rimsky-Korsakov’s evocative power bears weight to the argument, now enhanced by this guitar transcription.

Legend has it that Stravinsky, in conversation with Andrés Segovia, said ‘if you had, in the 1920’s, commissioned a work of mine for the guitar, I’d certainly had composed it’; Segovia’s reply would have been ‘I did not ask because I did not want to seem rude by not playing it’. Segovia’s repulsion to loud Modernism is evident, but it would have been interesting to witness his reaction to this tender, translucent Caballero transcription of the Dance of the Princesses from Firebird. This gives guitarists a taste of what the young Russian genius might have written for the guitar.