Cecilia Siqueira (Uruguai) and Fernando de Lima (Brazil) met during the 2º Concurso Internacional de Violão Pró-Música, held by the Brazilian cultural organization SESC in Caxias do Sul (2001). Fernando and Cecilia tied first place. But the competition also marked another milestone in their lives: the beginning of their partnership, and later on the Duo Siqueira Lima. Acclaimed by public and critics, the duo dilutes the frontiers between popular and classical music through impeccable virtuosic powers, capable of captivating the audience immediately.

For their premiere on GuitarCoop, the duo presents an eclectic repertoire combining popular and classical music, focusing on the theme of nationalism, a musical movement from the middle of the XIX century, which advocated the incorporation of regional elements that were common to each country’s music. It flourished amid political movements for independence and defied the European musical supremacy. Its aesthetical principles are based on the appropriation of popular manifestations and symbolic elements of folklore, using rhythm patterns and melodies from imagination and popular culture.

Composed by Enrique Granados Campiña (1867-1916), one of the representatives from the Spanish nationalistic movement, the duo presents Valsas Poéticas, originally composed for piano during Granados’ youth. Dedicated to the Spanish composer and pianist Joaquin Malats, this version is a two-guitar transcription by Sérgio Abreu.

According to Villa-Lobos, Henrique Oswald (1852-1931) is our “most admirable composer” from the beginning of the XX century, but was nearly forgotten after the “Semana de Arte Moderna” (“Week of Modern Art”), due to his strong European stylistic tendencies. Il Neige was originally composed in 1902 for piano and is featured here in a two-guitar transcription by Fernando de Lima. Heitor Villa-Lobos (1887-1959) is our most idiomatic composer, creator of a musical language that is particularly Brazilian. His influence on both classical and popular music continues to the present day and his works for guitar are among the most important in the history of the instrument. The duo presents Lenda do Caboclo (1920), originally composed for piano, in an arrangement for two guitars by João Luiz, which preserves its integrity, but with a new flavor. The new transcription of the Bachianas Brasileiras nº 4 for two guitars, by Fernando de Lima, makes its debut on this album. Originally composed for piano (1930-1941) and orchestrated in 1942.

The Quatro Estações Portenhas, by Astor Piazzolla (1921-1992), also known as “Quatro Estações de Buenos Aires”, is composed of four tangos and even though they are independent pieces Piazzolla used to perform them in an ensemble as a kind of popular suite. As it is a highly pictorial work, it gives us the impression of experiencing the four seasons in the Argentinean capital.

The duo presents two of such tangos, which date from 1970: Inverno Portenho, in an arrangement for two guitars by Sérgio Assad, and Primavera Portenha, transcribed for two guitars by Fernando de Lima. In such a plural theme as nacionalism, the Duo Siqueira Lima presents a masterful demonstration of expressivity. Beyond technique, this requires an explosion that is perhaps only found in love. The love between the guitars of Fernando and Cecilia surpasses the accord and transforms itself into chord. It is a dialog of souls and cultures, united by the universal language of music. And it seeks a significant other with which to perpetuate itself: the listener. 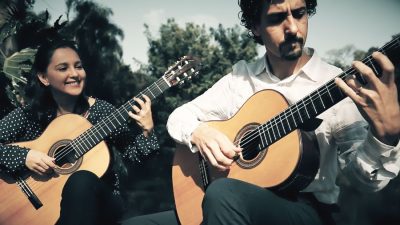 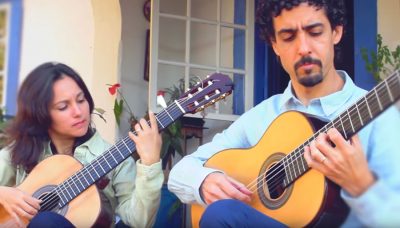 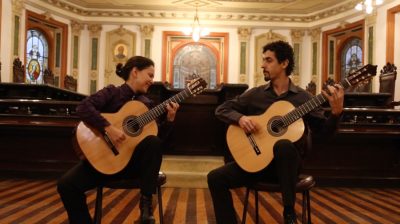