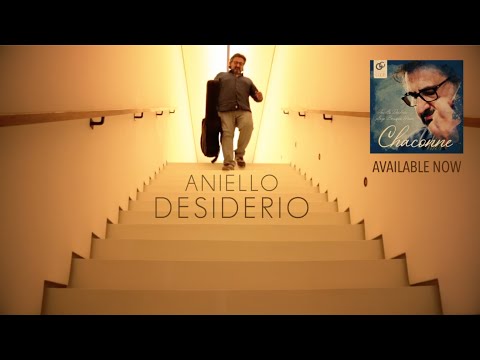 The Baroque as backdrop

Beyond the clash between the recreation of traditional repertoire and the effort to present 18th century styles in their own terms, artists active in these first few decades of the 21st century have shifted the question to the relationships established between works in a given program. Beyond a linear choice of repertoire, musicians such as Desiderio create musical dialogism through their interpretative decisions: through sounds more opaque or luminous, tempo more nervous or subdued, phrases suave or angular, expression becomes more decisive than both external concepts and strict affiliation to particular technical-performatic schools.

The concluding movement of the Partita n.2 for solo violin has become, over time, an autonomous work, inspirer of famous arrangements and transcriptions for different groupings such as those of Ferruccio Busoni (1866-1924) for piano and Andres Segovia (1893-1987), for guitar. In the second half of the 20th century, on the other hand – responding to the growing prominence of historical research – artists preferred to read Bach’s “Chaconne” directly from the violin part, engaging in minimal alterations. The generation of Aniello Desiderio is beyond such dichotomies.

Nothing could provide greater contrast with the strict and effective Bachian musical discourse than the improvisatorial and open compositional framework of the dances from Instrucción de Música sobre la Guitarra Española by Gaspar Sanz (1640-1710), originally composed for baroque guitar (5-double strings). Desiderio opted for the arrangement by Spanish guitarist Narciso Yepes (1927-97), which incorporates modern elements introduced by Joaquín Rodrigo (1901-99) in his Fantasía para um gentilhombre for guitar and orchestra (1954) dedicated to Segovia, perhaps the most successful piece fashioned from Sanz’s tablatures.

A Neapolitan like Desiderio, Domenico Scarlatti (1685-1757) settled in the Iberian Peninsula at the start of the 1720s. His more than five hundred sonatas for keyboard (single movements in binary meter) constitute a legacy of virtuosity, creativity, and non-conventional exploration of harmonic and rhythmic elements.

Used frequently by pianists as openers or transitions in recitals and albums, some of these sonatas were employed by guitarists to similar effect in transcriptions by Segovia and his descendants. With the advent of critical editions and recordings by specialists, we have also seen the rise of albums solely dedicated to Scarlatti. In the world of the guitar, the pioneering 1973 LP by Brazilian soloist Carlos Barbosa-Lima is worthy of note.

The “set” chosen by Desiderio includes meditative works such as K.32, K.34 and K.213, pieces with obsessive rhythmic repetitions and shimmering ornamentation, such as K. 74 and K. 149, as well as the solemn baroque aesthetic of such sonatas as K. 144 and K.408.

The temporal pauses, emphasis on counterpoint, and repetitions in the figure D#-E-F#-E-D#-E in various voices in the performance of K. 466 (originally in F minor but transcribed, here,
in E minor) call attention to the shift accentuated above: without ever ceasing to be baroque music transcribed for guitar – with everything that implies in this second decade of the 21st century – Aniello Desiderio searches for something more, for something that transcends limits and labels.

In 1992, Aniello Desiderio graduated with honours from the Conservatory of Music in Alessandria, age of eight, he performed in public for the first time, displaying such outstanding gifts that music critics began to refer to him as an “enfant prodige,” “wunderkind,” “a genius,” “the Orpheus of the guitar,” “a guitarist of the century,” and“il Fenomeno.”

Special Thanks to Marcelo Kayath and the incredible staff of GuitarCoop.
I had great time in São Paolo during the recording session, Fabio Zanon and
Alberto Mesirca for the wonderful transcription of Sonatas K 144 and K 466